The United Nations Resident Coordinator and UNDP Resident Representative to the Maldives, Ms. Shoko Noda, made her farewell call upon His Excellency President Ibrahim Mohamed Solih this afternoon at the President’s Office.

The President acknowledged and expressed his appreciation for all the important work the United Nations Development Program (UNDP) has done over the past several decades and continues to do in the present, in terms of progressing the Maldives’ socio-economic development. He thanked Ms. Noda in particular for the initiative and passion she has brought to the UNDP’s work within the Maldives during her time as the country’s Resident Coordinator.

Ms. Noda thanked the President for his remarks and, reflecting on her tenure, noted that the country is now on a positive trajectory in terms of consolidating the rights and freedoms guaranteed in its 2008 Constitution, and that the future of the country’s democracy looks bright.

She agreed with the several of the Government’s priority areas, including decentralization, women’s empowerment, economic development, and institution building and strengthening – further conveying that the UNDP team, led by her successor, would always stand ready to aid the Maldives’ government realize its development aspirations.

Ms. Noda also congratulated to the President for the successful Presidential elction and she congratulated the government on the outcome of the recently held parliamentary elections, noting that it reflects the strong support the Maldivian people have vested in this administration’s legislative agenda. Adding that the composition of the next People’s Majlis would allow the government to fully deliver on all of its pledges to the Maldivian people.

Ending the call, Ms. Noda expressed that it has been her pleasure to have worked in the Maldives, which in many ways has become a second home to her that she hopes she will be able to visit frequently. The President reciprocated her sentiments and reiterated his profound appreciation for Ms. Noda’s manifold contributions to the Maldives and wished her good fortune and success in all of her future endeavors. 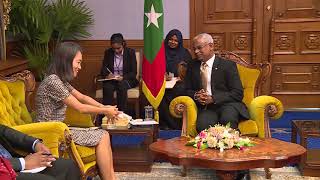