His Excellency President Ibrahim Mohamed Solih has attended the 127th anniversary celebration of the Maldives’ National Defense Force and expressed his appreciation for all the sacrifices made by our armed forces and all the work they currently do in terms of keeping the population of the Maldives safe with regard to threats from malicious actors and from the elements of nature, in the form of climate change related phenomena and environmental catastrophes.

The President noted that he, along with other citizens of the country have always held the MNDF in high esteem due to their passion and dedication to doing their duty. He further expressed that it was only appropriate that the rest us of do our due diligence in ensuring the welfare of our armed forces.

Accordingly, he noted that that the Coast Guards requests for a permanent harbor and dockyard facilities would soon be attended to and that funds have been allocated to the SIMCO housing units that are being built in Hulhumale, in light of that the armed forces, similar to the rest of the population, continue to face challenges with regard to access to affordable housing – the amelioration of which is a high priority of the present administration.

Similar to housing, access to quality healthcare is another priority area of the Government. As such, the President stated that within the next two months the military operated Senahiya clinic will be transformed into a fully-fledged hospital, which will provide an array of new services to its patients.

Furthermore, the President highlighted that the services provided by our armed forces especially with regard to disaster-preparedness would be enhanced by the current government’s decentralization policies, part of which will entail strengthening and enhancing the jurisdiction of area commands and ensuring more fire-station outposts, so that the entire population across the breadth of the country are less vulnerable to disaster and will have quick access to emergency services. 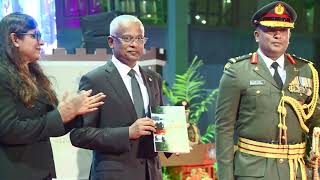