During the meeting, President Solih stated that the government would take necessary action to tackle the problems. 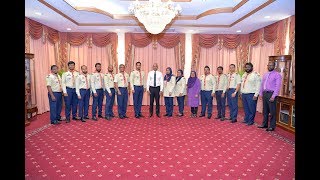