President meets with the members of Angolhitheem Island Council At a meeting held at the President’s Office, members of the council shared their concerns and future development projects with the President.

The Councilors especially noted the challenges being faced due to shortage of employees at the Council. They also requested to speed up some projects like the clean water services, sanitation services, futsal ground project and maintenance of harbor. Additionally, they emphasized that the community was facing difficulties due potholes on roads and lack of facilities in the Health Center.

Speaking in this regard, they highlighted the need for the Museum to display traditional items held in the Island.

During the meeting, President Solih stated that the government would take necessary action after discussing with the line ministries and tackle these problems. He further informed that all projects allocated in this year’s budget will commence. 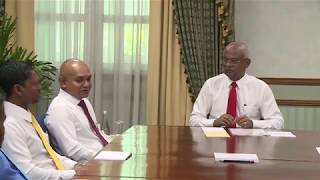