The Ambassador of Pakistan to the Maldives, His Excellency Vice Admiral Retd. Waseem Akram, met with Vice President Faisal Naseem this morning at the President’s Office, to pay a courtesy visit.

During the call, the Vice President noted the existing brotherly ties between the Maldives and Pakistan. The Ambassador returned mutual warm sentiments and further, congratulated the Vice President on assuming office. He reiterated the Pakistan Government’s desire to work closely with President Ibrahim Mohamed Solih’s administration.

The Ambassador and Vice President discussed ways of enhancing cooperation between the Maldives and Pakistan on a range of bilateral issues, placing special emphasis on the areas of trade, education, sports and health.

The Ambassador noted the success of the medical camp held last year, and expressed his eagerness to organize a new one this year.

Concluding the call, the Vice President expressed his gratitude for Pakistan’s continued support and assistance to the Maldives, whilst re-iterating the hope that the already strong bonds between the two countries will continue to strengthen in the coming years. 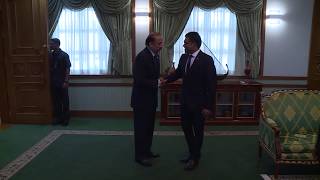