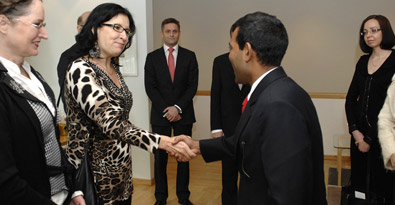 As part of his visit to Finland, President Mohamed Nasheed has yesterday met with representatives from Finnish travel agencies.

Discussions at the meeting were focused on the current global economic situation and its impact on the Maldives tourism industry.

During the meeting, the President said the government considered travel agencies and others in the travel industry as its development partners rather than just travel agents or hotel owners.

During the dinner, President said his visit to Finland was very fruitful and the Maldives and Finland could work together in a number of areas including climate change and renewable energy.

Speaking at the dinner, Mr Pekkarinen congratulated and commended the smooth transition to democracy in the Maldives, and said the President's visit would be a new beginning of bilateral and economic relationship between both countries. He said the Finnish government was committed to strengthening economic relations between both countries and increasing Finnish investments in the Maldives, especially in the area of renewable energy and other green technologies.

He also said Finland is committed to operationalise the Copenhagen Accord and meet the emission cuts. He commended the President's efforts against climate change and his vision to make the Maldives carbon neutral.