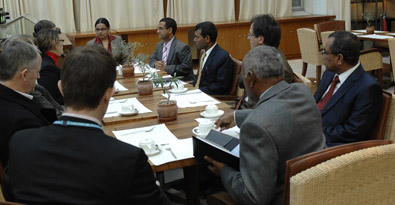 As part of his tour to Europe, President Mohamed Nasheed has yesterday met with officials from major human rights NGOs based in Geneva.

Discussions were mainly focused on extending the support of the NGOs present at the meeting, to strengthen the role of civil society of the Maldives in their respective areas, especially in the areas of protecting and promoting human rights.