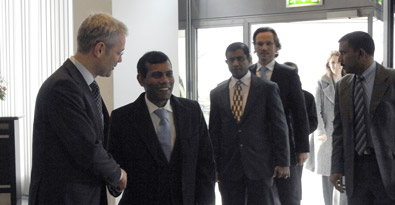 Speaking at the meeting, President Nasheed thanked the Minister and Germany’s constructive role at the COP15 meeting and pressed for EU support in operationalizing the Copenhagen Accord.

He also sought German assistance for adaptation and mitigation projects as well as for improving climate institutional capacity.

President Nasheed discussed the importance of achieving a legally binding treaty in the climate summit to be held in Mexico later this year.

Dr. Norbert Röttgen commended the President for his role at the Copenhagen Summit and said that Germany would continue to support the Maldives in its climate efforts.