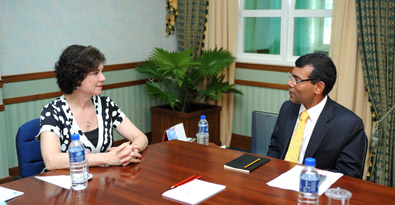 President Mohamed Nasheed this morning met with UNDP Deputy Regional Director at the Regional Bureau for Asia and the Pacific Ms Ligia Elizondo.

During the meeting held at the President’s Office, President Nasheed and Ms Elizondo discussed UNDP programmes in the Maldives.

The President also spoke on giving more emphasis to project monitoring, and implementing projects in a way the projects would ensue the maximum benefit to the Maldives.

Other areas of discussion during the meeting included decentralization programme and establishing a climate adaptation centre in the Maldives.