President speaks on the progress of delivering the government pledges 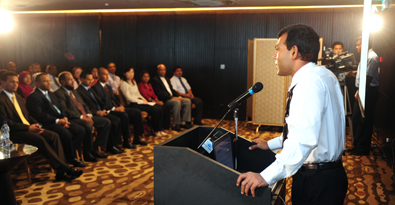 Addressing the plenary of the validation workshop on the Manifesto Strategic Action Plan 2009-2013, held at Holiday Inn this morning, President Nasheed highlighted the progress made by the government towards achieving the objectives of it’s election Manifesto.

The President said the Action Plan was a framework for the development, and an operational plan of how the government would proceed with achieving the objectives proposed in the Manifesto.

This strategic action plan outlines the policy frameworks the government would follow in order to achieve the five main pledges of the government – nationwide transport system; affordable living costs; affordable housing; affordable and quality healthcare for all; prevention of narcotics abuse and trafficking.

On the pledge to provide affordable living costs, he stressed the need for tax reform to effectively deliver on the pledge. He said the government has sent two bills on tax reform to the People’s Majlis, and a third was in the pipeline.

In terms of providing affordable and quality healthcare, the President said the Maldives has made progress in providing basic healthcare, and the communicable diseases and other fundamental health concerns like infant mortality were under control.

He said the policies on healthcare should take this into consideration. He emphasised the need to address the issues related to non-communicable diseases, while maintaining the standards of basic healthcare in formulating policies for health sector.

On preventing drug abuse and trafficking, the President underscored investigation and prosecution as the two most important areas that needed to be strengthened in order to address the issue.

The plenary was held at the conclusion of a series of workshops held by the government to validate the Strategic Action Plan of its Manifesto.

The Strategic Action Plan for 2009-2013 will be launched on 11 November.
SHARE:
Copied!
LATEST FROM THE PRESS OFFICE