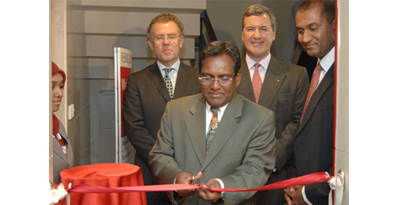 Speaking at a function held at the Malé branch of HSBC, Vice President Dr Waheed said the government needed the participation of private sector to make the Maldives world’s first carbon neutral country. Speaking in this regard, he said the government was in discussion with International Finance Corporation (IFC) to arrange credit facilities for businesses that want to implement new and renewable clean technologies in their business operations.

Dr Waheed said the HSBC “Green Office” was a first and an important step towards making the Maldives carbon neutral. He also said the initiative by HSBC was an example for other business organisations in the Maldives.

Vice President Dr Waheed congratulated the HSBC for taking the lead in creating the first “green” business office in Malé.

HSBC’s “Green Office” is fitted with energy efficient LED lighting and glass screens to maximise the use of natural light, along with reduced consumption of water and paper.