President participates in the clean-up programme 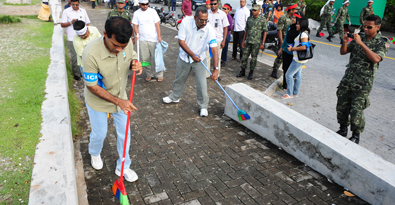 President Mohamed Nasheed has participated in the clean-up programme which is being carried out in Malé, Villingil and Hulhumalé. The programme was organised by Malé Municipality in collaboration with Maldives National Defence Force.

The President attended the inauguration function of the clean-up programme which was held this morning at the Malé Municipality area.

After launching the programme at the ground behind Dharubaarugé, the President visited all the wards of Malé and engaged in clean-up activities. He also visited Villingili and Hulhumalé.

The clean-up programme was organised in preparation for the Independence Day celebrations. Government employees and members of the public took part in the programme.