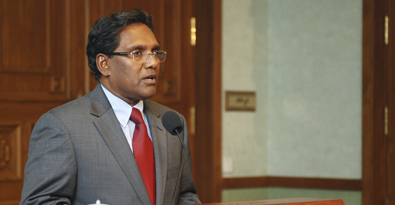 In a press statement delivered today at the President’s Office, Vice President Dr Mohamed Waheed has urged all parties to come together in the interest of consolidating democracy in the country.

In his statement, Dr Waheed noted that all citizens have a stake in the issue of the Bank of Maldives and that it was very much linked to the country’s economy.

He, therefore, said that it was important to investigate why Uz Abdullah Mohamed, chief judge of the criminal court, obstructed a police investigation related to the 2008 audit report on Bank of Maldives.

He added that the President had requested the Judicial Service Commission to investigate Judge Abdulla Mohamed.