President meets with members of the IMF mission 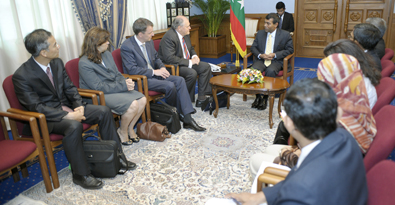 The members of the visiting Mission of the International Monetary Fund (IMF), has called on President Mohamed Nasheed.

Speaking at the meeting, the President thanked the IMF’s contribution to the country’s development. He further spoke of global economic slowdown and the need for the government to take strategic measures to reduce the economic constraints.

During the meeting, Mr Carter noted the challenges faced by the Maldivian Government, in providing basic services to the people during this period of global economic downturn.

The meeting was attended by the Minister of Finance and Treasury, Mr Ali Hashim; Governor of MMA, Mr Fazeel Najeeb; and, Finance Secretary at the President’s Office, Mr Ahmed Mausoom.