Nepalese Ambassador pays a courtesy call on the President 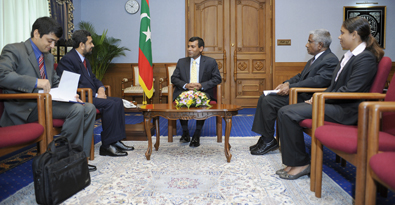 In their meeting held this morning at the President’s Office, President Nasheed and Ambassador Bhattarai discussed on the ways of strengthening bilateral relations and on possible areas of cooperation between the Maldives and Nepal. Discussions were especially focused on strengthening ties in the area of tourism and on ways of increasing people-to-people contact between the two countries.

The President stated that relations between the Maldives and Nepal are very strong indeed. He also noted that a comparatively large group of Maldivian students were undertaking their education in Nepal and that numerous Nepalese expatriates were employed in the Maldives.

Ambassador Bhattarai said he believed that under the new economic policy of the government, the Maldives would attain greater development. Further, he also extended his best wishes for the continued progress and prosperity of the people of Maldives.