Samdech Techo Prime Minister Hun Sen is on an official visit to the Maldives at the invitation of President Solih. Cabinet ministers and senior officials of the government joined the President and the Prime Minister and the visiting delegation.

The visit by Samdech Techo Prime Minister Hun Sen is his first to the Maldives. The Maldives and Cambodia established diplomatic relations on September 21, 1995. 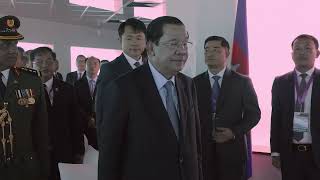