President Ibrahim Mohamed Solih on Monday signed the book of condolences opened in memory of the former President of China, Jiang Zemin. The book was placed at the Embassy of the People's Republic of China in the Maldives.

In his message, the President offered his sincere condolences to the government and the people of China as they mourned the loss of their former leader. The President also shed light on the remarkable progress and development China enjoyed under the leadership of former President Jiang Zemin.

The President also commended the great work of the late Jiang Zemin in paving the way for a more progressive China and the achievements China made in the international arena under his leadership. The late Jiang Zemin passed away on November 30, 2022, in Shanghai, China. He was 96. 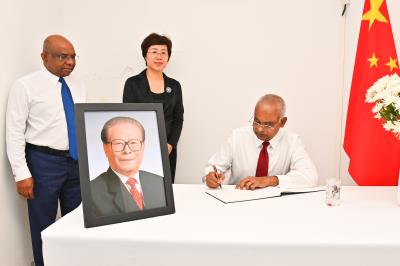