The President meets Island Council and WDC members of Baa. Maalhos Island: Council members pleased with progress of the water and sewerage project President Ibrahim Mohamed Solih met on Sunday with the Island Council and Women's Development Committee (WDC) members of Maalhos Island of Baa Atoll and discussed concerns about the island's development. The meeting was held at the President's Office this afternoon.

At the meeting, the council members expressed their contentment over the progress of the water and sewerage network project on the island. They noted that the administration had kept its commitment to the equitable development of all islands over the past four years.

The council members also shared with the President pertinent issues and concerns relating to the island's developmental progress. Topics discussed at the meeting included expediting the island's harbour project, granting jurisdiction over Hibalhidhoo Island, and concerns about coastal erosion at the designated boat yard.

They also conveyed difficulties that arise due to the mosque's small size, requested assistance to conduct religious awareness programmes, and discussed the need for sports facilities. Members of the WDC also echoed calls by the council members about the jurisdiction of Hibalhidhoo Island.

At the meeting, the President shared the latest details of the developmental plans for the island. He then said that he would relay the concerns communicated by the council to the relevant authorities to find amicable solutions. The President also reiterated the administration's commitment to consult with local councils in matters related to their development. 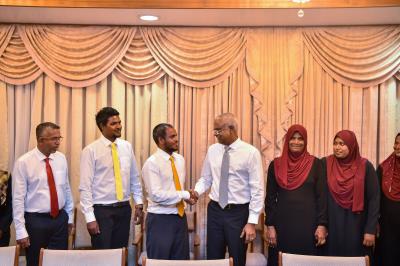 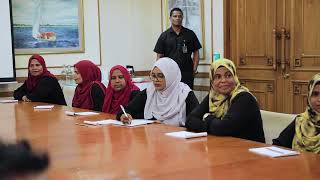