This administration’s policy is to expand tourism to the north and south of the Maldives and establish necessary support services, says the Vice President Vice President Faisal Naseem stated on Friday night that the administration’s policy is to expand tourism to the north and south of the Maldives and establish the necessary support services—including sustainable and affordable air and sea transportation. He made these remarks while speaking at the sixth edition of the South Asian Travel Awards (SATA) 2022, which was held at Adhaaran Select Hudhuran Fushi, Maldives.

Speaking at the event, the Vice President thanked the organisers of SATA and stated that since its launch in 2016, it has become a unique platform celebrating the finest in South Asian hospitality. He stated that the six South Asian countries represented in the SATA Awards have the best to offer in the world.

The Vice President highlighted how the tourism industry began in the Maldives 50 years ago. He stated that it was the hard work, dedication, and sacrifice of a few young pioneers who, against all odds, overcame many challenges and introduced tourism to the country.

Speaking about how the Maldives has remained the leading travel destination, the Vice President said that the country’s winning characteristic was the genuine Maldivian hospitality, which is in every Maldivian’s true nature. He said that the warm, friendly, and generous reception and the mindset to provide guests with the best possible holiday experience is what makes the Maldives unique.

The Vice President also shed light on the hurdles the travel industry had to go through due to the Covid-19 pandemic. He emphasised the precautionary measures taken by the administration when the Maldives was forced to close its borders and temporarily close resorts and guesthouse operations, which had a negative impact on the country's economy. The Vice President said that it was the leadership of President Ibrahim Mohamed Solih and the collective effort of the government and the tourism industry that helped the country through the hardships and made it possible to reopen borders and invite travellers back to the country.

The Vice President thanked stakeholders in the tourism industry for their assistance and cooperation, and stated that the industry's support was critical on the Maldives' road to recovery. 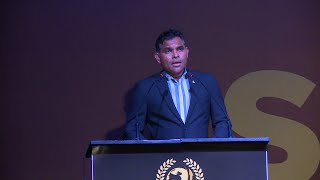 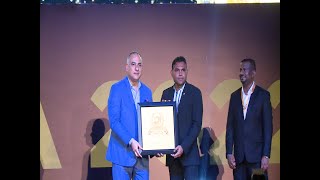