President Ibrahim Mohamed Solih on Tuesday stated that ensuring ease of livelihoods and a ‘Jazeera’ lifestyle for all citizens across the nation without bias is the best way to honour the nation. He made the remark while speaking at the official ceremony held to mark the National Day in Utheemu Island of Haa Alifu Atoll.

In his address, the President reflected on the sacrifices Muhammad Thakurufaanu Al Auzam made in liberating the Maldives from Portuguese occupation. He said that the revered hero’s most notable contribution to the country was the preservation of its national identity. President Solih spoke about the qualities attributed to Muhammad Thakurufaanu and how he had envisioned the country. He particularly noted how the hero was known for being cordial, compassionate and kind to guests and said that the hospitality industry the Maldives is famous for was predicated on these qualities and principles.

The President also said that there were very few historical sites such as the Utheemu Ganduvaru in the Maldives now and emphasised the importance of preserving the country’s history, culture and traditions. He noted the administration’s efforts to protect the Maldives’ heritage sites, mentioning the restorative work done on the Kalhuvakaru Mosque in Malé. He added that historical sites and artefacts were now being carefully protected under a management policy.

The President was accompanied by First Lady Fazna Ahmed, cabinet ministers and senior officials of the government, at the ceremony. 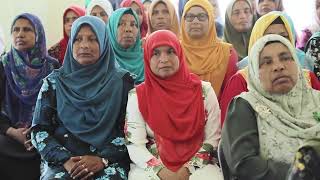