The new Ambassador of Indonesia presents her credentials to the President The new Ambassador of the Republic of Indonesia to the Republic of Maldives, H.E. Dewi Gustina Tobing, on Tuesday presented her credentials to H.E. President Ibrahim Mohamed Solih. The President and the Ambassador spoke extensively afterwards to further strengthen Maldives-Indonesia relations and other mutually concerning issues.

After congratulating the Ambassador on her new appointment, President Solih spoke with her about the decades-long history of the relationship between the two countries. He asserted that the close ties were primarily due to close people-to-people contact. He then expressed his hopes of increasing bilateral consultations to further explore new avenues of cooperation to solidify the partnership.

President Solih inquired with the Ambassador about the situation of the Covid-19 pandemic and went on to discuss ways to strengthen trade ties, developmental cooperation, and partnership on the regional and international front. He also briefed the Ambassador on his administration’s "Free Education Scheme for Degree Students" and inquired about ways of increasing scholarship opportunities for Maldivian students to pursue higher education in Indonesian institutions.

Speaking with the President, the Ambassador highlighted that our religion was a strong bridge between the two peoples and talked about the approximately 2,000 Indonesians working in the Maldives’ tourism and other economic sectors. The Ambassador then assured the President of her interest in strengthening bilateral ties and multilateral cooperation between the two countries. 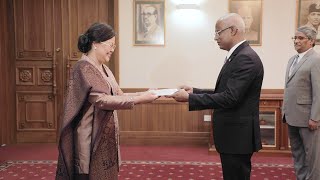