Vice President Faisal Naseem on Wednesday stated that the astute leadership of President Ibrahim Mohamed Solih’s administration, coupled with the steadfast support of the private sector, paved the road to recovery for the Maldives’ tourism sector from the downturn caused by the Covid-19 pandemic. He made the remarks while delivering his statement at the United Nations General Assembly’s high-level thematic debate on "Putting sustainable and resilient tourism at the heart of an inclusive recovery."

The debate is convened by the President of the United Nations General Assembly (UNPGA), Abdulla Shahid, in collaboration with the World Tourism Organisation (UNWTO). Specifying the effects of the pandemic on the tourism industry—the lifeblood of the Maldives’ economy—the Vice President stated that the country’s GDP contracted by 60 per cent and faced losses of over US$ 4.6 billion.

Noting that the pandemic forced the Maldives to close its borders, the Vice President stated that they have since been successfully re-opened to travellers from across the globe. "Our economy is on the road to recovery. In 2021 we were able to exceed our target of one million tourists by over 30 per cent," he said, adding that "we have managed to weather the storm and come out stronger."

The Vice President specified the numerous government interventions that paved the path to recovery. He lauded the administration’s enactment of a minimum wage law, benefiting the lives of over 13,000 tourism sector employees, and a law that governs a 10 per cent tourism industry service charge, of which 99 per cent is distributed to tourism sector staff.

He then described the administration’s efforts at tourism diversification and localisation, taking tourism to the island communities to encompass culture and heritage, island ecosystems to tourism products and enhance community participation, especially among women. He stressed that "our tourism master plan reflects our commitment to ensuring that our tourism industry is grounded in protecting the environment, conservation, and sustainability."

The Vice President concluded his statement by expressing his interest in engaging with member states and other stakeholders to ensure that tourism plays a central role in Covid-19 recovery and the achievement of the Sustainable Development Goals. 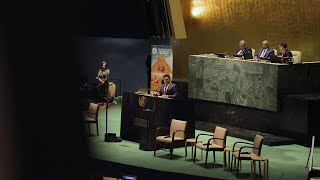 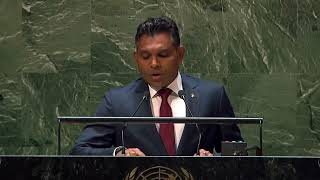