President Ibrahim Mohamed Solih on Tuesday announced that police service will be expanded to 25 additional islands, and that contracts have been drawn up to build police stations on 61 islands, this year. He made the statement at the ceremony held to mark the 89th anniversary of the Maldives Police Service. The President was accompanied by First Lady Fazna Ahmed.

The President said that a police presence would be established on all inhabited islands in the country by 2023 in a major initiative to ensure a safe and secure Maldives. He emphasised that improving the standard of police service was a critical task entrusted to this government by the people, and highlighted the numerus strides made in police reform over the last three years. President Solih noted the effort to expand neighbourhood police to all islands and said that professional development programs had been launched on all the islands where a police presence was established.

President Solih stated that the National College of Policing and Law Enforcement in southernmost Addu City was a result of successive governments’ hard work and determination to improve police services in Maldives. The President recognised the National College of Policing and Law Enforcement as a token of good will from the government of India to the Maldives. President Solih affirmed that the government is committed to enhancing the capacity of the police and assured that the police would be provided with the necessary human resources, training and technologies required to elevate their standard.

President Solih, in his speech, highlighted the connection between drug networks and organised crime as one of the biggest challenges to the peace and harmony in the country and stated that it was a matter of great concern to the people as well. He added that special task forces were being formed to tackle the situation and that positive changes would soon be visible.

President Solih concluded his remarks by advocating to make the best use of the upcoming holy month of Ramadan.

At tonight’s ceremony, the President awarded medals to recipients and launched a mobile phone application developed by the Maldives Police Service. 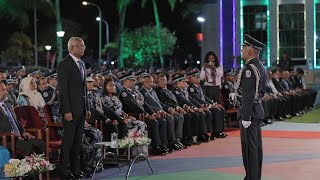