The Digital Terrestrial Television Broadcasting Network Development Project is supported by a free grant from the Japanese government. The efforts to establish a digital television network was initiated in February 2022. The project set for completion in 2024 would ensure coverage for 90 percent of the population and provide eight high-definition channels for free.

The Digital Terrestrial Television Broadcasting Network is a platform capable of providing numerous services. The most notable feature of this network is its ability to reach out to the populace in case of a natural disaster.

The Ambassador of Japan to the Maldives, Her Excellency Takeuchi Midori was in attendance at today’s ceremony. 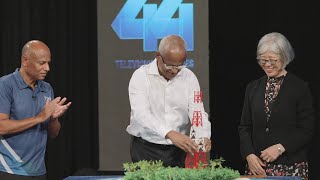