Reminiscing the presidential elections, President Solih stated that he was satisfied the government was fulfilling the developmental plans presented to him by the Addu City Council on the last campaign gathering held in the city. He noted that many of the strategies mentioned the plans that were provided to him by Addu residents, were already in progress.

President Solih said that he had not forgotten the pledges he made to the people of Addu City and highlighted the major developmental projects currently underway, particularly noting the road development project. The President also revealed that redevelopment of Gan International Airport would commence soon.

The President remarked that land reclamation was amongst the development plans conferred to him by the residents of Addu during the presidential election, and underscored the land reclamation project in Addu City that was contracted today. President Solih said that the project would proceed in accordance with the recommendations made by the Environment Impact Assessment (EIA) report in an effort to mitigate any environmental damage.

President Solih had also addressed the need for more accessible employment opportunities. The President reflected on expanding the tourism sector, and noted that part of Herethere Resort had already been operational, while Shangri-La Resort would be reopened soon. He also revealed that the building that housed ‘Dhoogas’ had been leased to Gan International Airport to be developed as a large hotel.

In his speech, the President highlighted efforts to improve essential needs such as utility services and healthcare. In an effort to resolve power shortages, the President revealed that a new powerhouse with 41 megawatts capacity would be completed within seven months. As per the concerns raised by the management of Addu Equatorial Hospital (AEH), President Solih said that the government would increase the hospital’s human resource capacity and equipment.

The President earlier on Sunday visited the FENAKA Office and toured the Addu City Nature Park. The President also inaugurated ‘Masjid Ibrahim’, a new mosque constructed in the city. 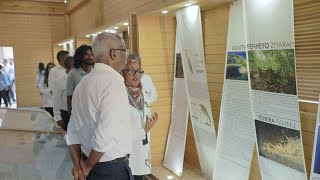 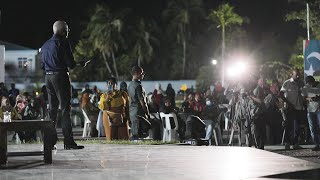 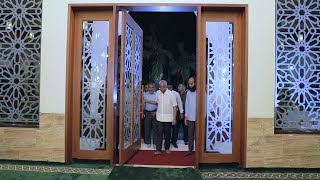