President Ibrahim Mohamed Solih on Sunday officially launched the work on the biggest ever road development project to be conducted in Addu City, which also includes a storm water drainage system. Dr. Subrahmanyam, the Minister of External Affairs of the Republic of India and his local counterpart, Abdulla Shahid, the Maldives’ Minister of Foreign Affairs and recipient of the Order of the Distinguished Rule of Izzuddin (ODRI), had accompanied the President to this ceremony.

The President and First Lady are currently in Addu City as part of a four-day trip to the Maldives' southern cities. A high-level delegation accompanied them on this trip. 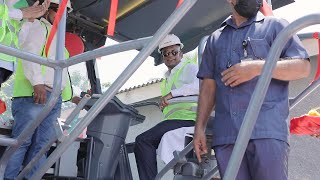