President Ibrahim Mohamed Solih on Saturday evening met with members of Addu City Council and the Women's Development Committee (WDC) to discuss issues concerning the progress of the city. The councillors noted that the development projects currently underway in Addu City are the largest in the city's history.

The councillors briefed the President on the latest updates and concerns regarding the ongoing projects in Addu City. Concerns raised by councillors include housing difficulties, the council's requirements for tourism development, improving the services of Addu Equatorial Hospital (AEH), increasing the budget allocated to the Addu City Council, youth-centred development needs such as fixing the lights at Addu Zone Stadium and improving resources such as human resource capacity. During the meeting, the Addu City WDC had expressed gratitude towards the government for its efforts to empower women.

President Solih expressed his appreciation for the warm welcome he received upon his arrival to the city. The President stated that the development projects on islands and in cities would take into account council and public input.

The President and members of his delegation briefed the councillors and the WDC on the latest updates of the developmental projects that are currently underway in the city. Following the discussions on the city's major projects, the President stated that the issues relayed by the council would be addressed and deliberated with the relevant government institutions and bodies. 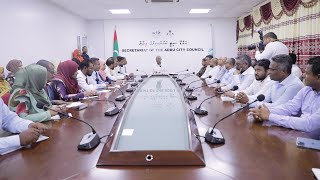