President Ibrahim Mohamed Solih on Thursday morning received tourism and restaurant industry consultant Mr George Corbin for a call at the President’s Office. Mr Corbin greatly contributed to the introduction of tourism to the Maldives with his first visit to the Maldives in 1972 as an Italy-based diving tour operator.

President Solih went on to speak about the administration’s commitment to developing the tourism sector and highlighted the recent introduction of homestay tourism in the Maldives. Mr Corbin described the Maldives’ tourism sector's progress as "superb" and said the future looked bright, despite room for progress. He went on to highlight the importance of attracting more middle-class travellers.

President Solih and Mr Corbin also spoke about strengthening the domestic transportation network, with Mr Corbin describing the building of new domestic airports as a positive development. The two went on to discuss ways to ease travel for tourists from distant markets like the Americas.

President Solih and Mr Corbin concluded their call with Mr Corbin expressing his gratitude for the "touching" hospitality he received in the Maldives. 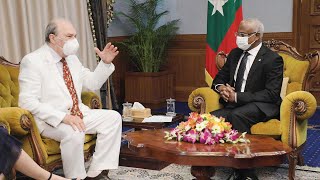