President Ibrahim Mohamed Solih has officially welcomed the "Birmingham 2022 - Queen’s Baton" to the Maldives. The official welcoming ceremony was held at the President’s Office this afternoon.

The baton was formally handed over to President Solih by Mohamed Abdul Sattar, President of the Commonwealth Games Association and the Maldives Olympic Committee (MOC). He also presented President Solih and Vice President Faisal Naseem with the "Birmingham 2022 - Queen’s Baton" jersey and took part in a photo session.

The Relay began on October 7, 2021, when Her Majesty the Queen placed her Message to the Commonwealth in the Baton. The Commonwealth Baton is currently on its 294-day journey to every part of the Commonwealth. This collective journey would ignite hope, solidarity, and collaboration as it connects communities, embraces unique cultures, and shares inspirational stories.

The 16th official Queen’s Baton Relay would continue its global journey around the 72 Commonwealth nations and territories before concluding at the opening ceremony of the Birmingham 2022 Commonwealth Games on July 28, 2022. 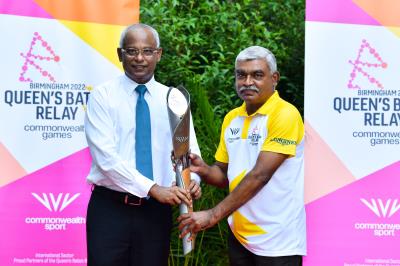