President meets AA Mathiveri residents, Council and WDC: The Island’s residents express gratitude for developmental efforts being undertaken by this administration regardless of considering the Island’s size President Ibrahim Mohamed Solih has met with the North Ari Atoll Mathiveri Island’s residents, Council and Women's Development Committee (WDC), this morning at the Mathiveri Island. During two separate meetings with Island residents, the Council and the Women's Development Committee (WDC) expressed gratitude for the administration's developmental efforts, despite the Island's size.

At the meetings, AA Mathiveri residents, Council and WDC shared their intended developmental plan of the Island and discussed their concerns and challenges with the President.

Speaking at the meeting, the issues experienced owing to a lack of land were particularly addressed by Mathiveri Council and WDC. They also asked the President to tackle the issues by initiating a land reclamation project on the island. At the meeting with the Island residents, the same points were expressed.

In response to this request, the President announced during a meeting with Island residents that the land reclamation project will be included in the Island's next year budget. He also stated that the administration will endeavour to resolve the problems that MTCC has encountered while carrying out land reclamation.

The Mathiveri Council and the WDC noted at the meeting that the health centre needed to be upgraded and service hours needed to be increased. They also expressed their desire to begin 11th and 12th grades at the school. They also requested that Mathiveri Finolhu be added to their jurisdiction. Also mentioned was the need for more sport facilities for the island's youth, as well as information concerning the island's electrical situation.

The President indicated that the health centre expansion project has already been budgeted for next year. He also added that he will communicate to the relevant ministry about extending the hours of operation at the health centre. The President went on to say that the initiative to build 12 classrooms in the School is in the tendering process. He also noted that the councillors should meet with the education ministry to discuss the establishment of grades 11 and 12 in the school.

At the meeting, The Women's Development Committee (WDC) emphasized the difficulties they encounter in carrying out their developmental activities due to a lack of dedicated space. They also stated that this particular issue will be resolved once the meeting hall is completed. In response to these concerns, the President stated that the administration will offer additional funding for the construction of this meeting hall.

Following these two meetings, the President toured the Island's health centre and inquired about its services and operations.

Mathiveri Island is the President’s fourth destination on his current two-day trip to six islands of North Ari Atoll. President Solih is accompanied on this trip by a delegation of cabinet ministers and senior officials from the government. 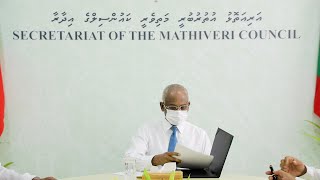 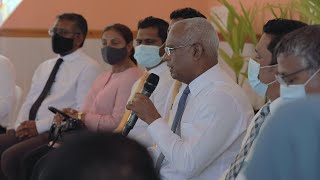