President Ibrahim Mohamed Solih has met with the North Ari Atoll Ukulhas Island Council and Women's Development Committee (WDC) this morning at the Secretariat of the Ukulhas Island Council. President Solih highlighted during the meeting that development projects progress faster and more efficiently with improved coordination between the government and the councils.

Councillors relayed the most urgent needs and difficulties faced by the residents of Ukulhas Island during the meeting today, relaying financial shortages for conducting administrative tasks. They stressed the need for finding better alternatives to raise finances for their activities to adapt to the burgeoning local tourism sector in the island. They also recommended allocating a dedicated percentage from Green Tax to them to ease their financial burdens. In addition, they shared their concerns with the President about "MIFCO Ukulhas", a company operated by the island's Cooperative Society and Maldives Industrial Fisheries Company (MIFCO). The WDC members also spoke during the meeting, highlighting the need for training to expand their operations.

Speaking at the meeting, the President shared recent updates on ongoing Projects on the island. Addressing the request on Green Tax, the President noted that the government would consider their request and find a better solution after discussing it with the relevant authorities. He also stated that he would facilitate training opportunities for the WDC through the Local Government Authority (LGA).

Ukulhas Island is the President's third destination on his current two-day trip to six islands of North Ari Atoll. President Solih is accompanied on this trip by a delegation of cabinet ministers and senior officials from the Government. 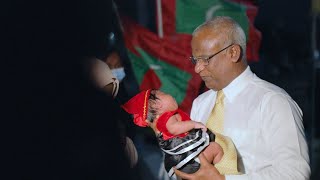