New Ambassador of the Argentine Republic presents credentials to President President Solih welcomed the Argentine Ambassador to the Maldives, congratulating him on his appointment and expressing his gratitude to the Argentine Republic for their support towards the Maldives’ candidature during the 76th United Nations General Assembly elections, in June earlier this year. The Ambassador responded that Argentina had always remained a close friend and supporter of the Maldives, and that they were honoured to help and happy to see the Maldives play a major role in the international arena developing multilateral relations.

Speaking to the Ambassador following the ceremony, President Solih stated that the Maldives hopes to see further collaboration between the two countries, especially in the areas of tourism, sustainable development and upholding human rights and climate change. The President and Ambassador spoke at length regarding the climate emergency, with Ambassador Gobbi relaying that Argentina would follow the Maldives’ example in playing a more significant role in the climate crisis, especially ocean conservation.The President expressed hope to collaborate closely for COP26, held in Glasgow later this year, and explore collective efforts to shift to renewable and alternate forms of energy in place of fossil fuels.

Concluding the call, the President congratulated Ambassador Gobbi once again and stated that he hopes the Maldives would continue receiving support, assistance and engagement from Argentina. The Ambassador agreed, and both affirmed their commitment to collaborate further for the mutual benefit of both countries. 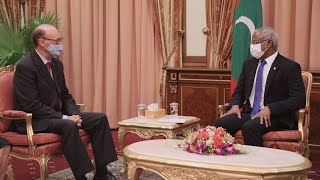