Vice President Faisal Naseem has met with the Councillors from Kaashidhoo Island of Malé Atoll. Discussions at the meeting, held at the President’s Office this afternoon, were centred on the developmental plans, most pertinent issues and urgent needs faced by the residents of Kaashidhoo Island.

Councillors expressed their concerns about the delays in completing the island's water and sewerage project and requested for the Kaashidhoo health centre to be developed into an Atoll Hospital. They stated that residents encounter difficulties as a result of a shortage of harbour space, proposing a new harbour be built on the island. The councillors expressed an interest in expanding the island's tourism sector in order to increase employment and promote economic growth. The residents also require an ambulance, according to the councillors, further mentioning the difficulties faced due to the lack of resources at the school. In addition, they revealed that Kaashidhoo youth are exhibiting an interest in fishing, requesting Fish Aggregating Devices close by.

The Vice President assured council members that, after consulting with relevant line ministries, the government would take the required steps to resolve the specific challenges and concerns voiced by members of the Kaashidhoo Island Council. He also requested that councillors collaborate with relevant departments to address the issues highlighted.

In addition, the Vice President stated at the meeting that councillors should conduct awareness initiatives to reduce negative habits in the community. He also mentioned the importance of conducting skill development programmes in order to generate a stronger future generation. He stated that the community would be at peace as a result of this. He also requested that special attention be paid to child protection and that their electronic devices be monitored to ensure their safety. 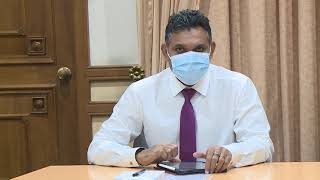