President Ibrahim Mohamed Solih has, late this afternoon, met with the members of senior administrators of healthcare providers in North Maalhosmadulu Atoll. The meeting was held at Kanbaidhi Maalam at Rasgetheemu Island.

The President inquired on ways to increase the efficiency of services provided to the Atoll’s residents. Senior officials expressed their worries, challenges and requirements to improve services. They discussed budgeting, human resources, and shortages in equipment and infrastructure. They also noted difficulties in the maintenance of existing healthcare infrastructure and requested an ambulance. Speaking further, they also noted difficulties in collaborating with some healthcare institutions and discussed the difficulties they faced in carrying out tasks at their respective islands' health centres.

Speaking at the meeting, the President addressed and shared information about the administration's goal for promoting decentralised healthcare to expand current the medical services provided to residents nationwide. He stated that the issue of ambulance shortages, as well as other concerns, would be discussed with relevant authorities and resolved accordingly.

Following the meeting, the President checked on the progress of the jetty and 700ft by 250 ft harbour development project at the island. 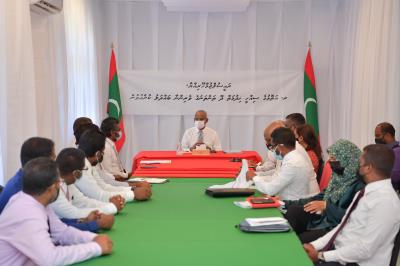 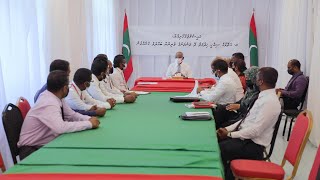