President Ibrahim Mohamed Solih has met with the members of the Alifushi Island council of North Maalhosmadulu Atoll and the island's Women's Development Committee (WDC). Alifushi Island Council members reflected upon the massive developmental strides taken by this administration towards the progress of the island, stating that government initiated developmental projects are swiftly underway and that the people are appreciative of the efforts. The meeting was held at the Secretariat of the Alifushi Island Council.

At the meeting, the President disclosed the latest information regarding ongoing developmental projects concerning the island. He revealed the government’s decision to establish a mid-range 30-bed hospital on the island. He further shared information about different loan schemes introduced by the administration with the councillors.

The President said that he would work with the relevant government agencies to find solutions for the problems discussed during the meeting. Regarding the concerns raised by the WDC, President Solih disclosed that the government would provide an increment to their salaries starting next year and that the government will pursue avenues to address the issues highlighted by the committee. 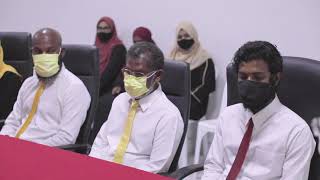 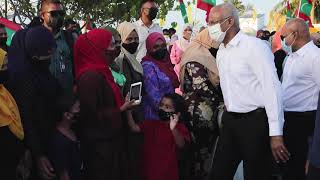