President Ibrahim Mohamed Solih has today met with the members of the Maaungoodhoo Island Council of North Miladhunmadulu Atoll and the Women’s Development Committee (WDC), where Councillors reaffirmed their full support for the administration's decentralised development strategies for their island, acknowledging the work this administration is doing for the progress of Maaungoodhoo Island.

Members of the Maaungoodhoo Island Council discussed the most pressing issues and requirements from the island's population. Their main concerns included water and sewerage services, the FENAKA office building, and harbour concerns. The Council also mentioned the difficulties that islanders experience as a result of the school's multi-purpose hall project's initiation being delayed. They also stated that the residents require coastline protection, a modern mosque, a swimming area, police presence to address some social concerns, and the improvement and modernisation of the local football field.

In response to the Councillors' concerns, President Solih stated that his administration would collaborate with relevant government bodies to find prompt solutions. He provided updates on current and future development initiatives that may affect the population. He also stated that the administration had decided to raise the wages of WDC members.

Following the meeting, the President and First Lady spent some time with the students at Maaungoodhoo School. The First Couple also met with teachers and parents to learn about their issues and needs. The President emphasised that teachers play a significant role in achieving the administration's most important goals. 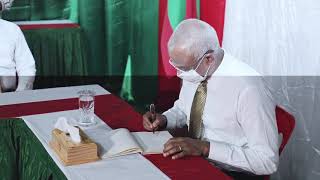 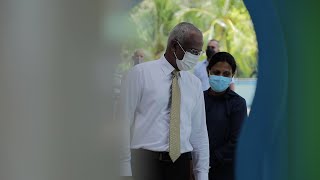