Shaviyani Funadhoo planned to be developed as the atolls' hub, says the President President Ibrahim Mohamed Solih has held discussions with the North Miladhunmadulu Atoll Funadhoo Island Council and Women's Development Committee (WDC), revealing that the government plans to develop Funadhoo Island as the hub of the atoll. The discussions were held today as part of his ongoing visit to the atoll.

Discussions at the meeting centred on the most pertinent issues facing the residents of the island. Councillors raised difficulties faced due to coastal erosion, land scarcity and deterioration of the airport road. They also expressed concern over Farukolhu Island, a close-by uninhabited island, and inquired about returning buildings currently utilised as Covid-19 management facilities for regular use. They also discussed several other pertinent issues related to the social wellbeing and development of the island.

The Funadhoo Island WDC updated the President on their training programmes and activities conducted for the progress and wellbeing of the island community and requested a dedicated women's centre. They stated that such a centre would greatly facilitate administering such activities.

President Solih addressed the concerns raised by the councillors and WDC members during the meeting. He revealed that the government plans to develop Funadhoo Island as a focal point for the progress of the atoll while further developing the harbour, hospital, school, airport and other public facilities. He stated that the government would rebuild the airport road and revealed that Farukolhu is already under the council's jurisdiction.

The President further noted that while many projects in the atoll were delayed due to Covid-19, the economic situation in the country had now taken a turn for the better, allowing projects to be reinitiated. He said other pertinent issues shared by the council, such as coastal erosion and housing difficulties, would be raised to the relevant government agencies and addressed accordingly. 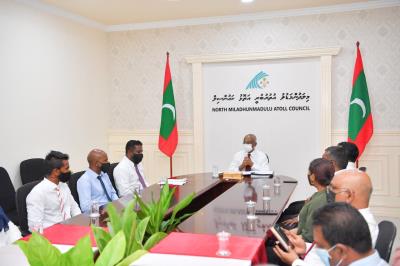 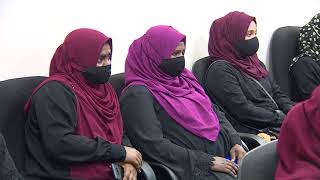