President Ibrahim Mohamed Solih met with members of the North Miladhunmadulu Atoll Council today, and the Councillors expressed that they would provide their full support for the administration's development strategies for the Atoll. The discussions, held today afternoon at Shaviyani Atoll Funadhoo Island, focussed on atoll development plans and several vital concerns faced by North Miladhunmadulu Atoll's residents.

The Council raised several concerns from the residents of North Miladhunmadulu Atoll such as the utilisation of uninhabited islands in the atoll. They also requested the government's aid to expedite ongoing resort development projects in Shaviyani Atoll, establish sufficient transportation facilities, improve the Atoll Hospital and expand the Education Centre. Furthermore, they also noted that there is a shortage of space for the Council.

Addressing the concerns raised by the Councillors, President Solih affirmed that his administration would work with relevant government agencies to find swift solutions. He shared updates on the ongoing and future development plans that would impact the residents of the Atoll. He also mentioned that the government had completed the collection of bids for the Shaviyani Bilehfahi Island Airport project. Further, he revealed that the government is also working on enabling nighttime travel at Funadhoo Island Airport and establishing a mini-hospital on Milandhoo Island.

The President concluded the discussions stating that implementing development initiatives would be simple and swift with the collaboration of the council. 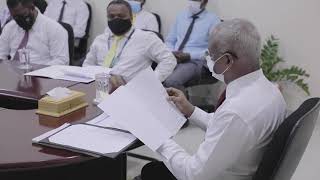