Vice President Faisal Naseem has met with the members of Dhigurah Island Council of South Ari Atoll, this morning, at the President’s Office. During the meeting, the councillors acknowledged that significant upgrades had been made to the island's health centre under this administration and expressed their gratitude to the government.

Dhigurah Island Council shared the priorities and concerns raised by the island’s residents. They identified core and critical needs, such as certified health and safety personnel to cater to the booming local tourism industry. The Councillors also requested an additional healthcare facility and highlighted the importance of upgrading the harbour to address space constraints. Dhigurah Island Council further delineated challenges due to inadequate educational facilities, the necessity to provide higher secondary education and the development of a local youth centre.

In response to the concerns raised, the Vice President assured them that the administration would work with Atoll and Island Councils to collectively develop all islands equally, as per the pledges made by the government. He announced that he would meet with relevant authorities and line ministries to discuss how they could collaborate to seek solutions to the council's concerns.

Vice President Faisal Naseem encouraged Councillors to carry out their responsibilities to the best of their abilities, as sanctioned under the amendments to the Decentralisation Act. He urged them to pay special attention to extracurricular activities for students, such as swimming, which encourages skills development. He also noted that it is crucial to do everything necessary to assure the safety and security of children. The Vice President also advised the council to pay close attention to the Health Protection Agency's (HPA's) rules for conducting local tourism. 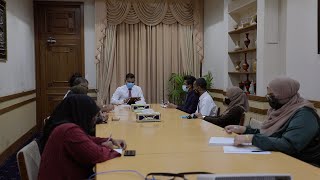