President Ibrahim Mohamed Solih has met Rayan Riyaz Abdul Wahid, a ten-year-old boy who attained an A star grade in the Chemistry subject during the GCE 'O' Level examinations held in June this year. Rayan, a student at Huravee School in Hulhumalé City, was invited to the President’s Office along with his parents, late Monday morning.

The President congratulated the young boy and expressed delight at his accomplishment. He also congratulated Rayan’s parents, Ms Aishath Yumna and Mr Mohamed Riyaz, for their hard work and encouragement, which had undoubtedly encouraged Rayan to achieve the incredible feat at such a young age. President Solih asked Ryan about his journey and what had sparked his interest to study Chemistry. He also asked Rayan what profession he might want to pursue when he grows up and inquired on what kind of assistance he needs from the President.

Rayan said that he aspires to become a scientist when he grows up and that for now, he wants to acquire laboratory apparatus to create a home lab setup where he can practice small experiments.

Speaking to the President, Rayan’s mother revealed that he had been passionate about books from an early age and, as his mother was a Chemistry teacher, Rayan had access to Chemistry books at home. She further emphasised that Rayan did self-study for the exam during the lockdown due to the pandemic last year. Rayan’s father thanked the President for acknowledging Rayan’s success and expressed their appreciation for the gesture.

President Solih conferred a special gift in recognition of Rayan’s achievement and stated that he would provide any support needed by Rayan going forward. The Minister of Education Dr Aishath Ali, Senior Officials at the President’s Office and the Principal of Huravee School, Abdullah Rasheed, also attended the meeting. 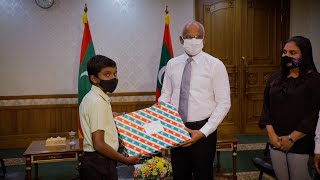