This government prioritises providing all basic necessities required for every citizen to live a dignified life, regardless of the islands' population - President President Ibrahim Mohamed Solih has stated that his administration's policies were shaped to prioritise providing all the basic necessities required for every citizen to live a dignified life, regardless of the population of their island. The President said that basic utilities such as water, sewerage and electricity, and harbours, to accommodate smooth embarking and disembarking from the island, as well as easy access to quality education and healthcare, is the right of every Maldivian citizen. He made this statement earlier this afternoon while speaking at the official inauguration of the new harbour at Omadhoo Island of Kolhumadulu Atoll.

Speaking further, President Solih recollected that when he visited Omadhoo Island previously, three years ago, the residents and council members had implored him to construct an adequate harbour and to find a solution to the provision of electricity in the island. Omadhoo residents had expressed that they had felt largely ignored by previous governments and any progress the island had seen had come from the kindness of altruists or the hard work of the residents of the island themselves. 'Today, I fulfil the pledge I made to the residents of Omadhoo three years ago, the President said. He lauded everyone whose hard work made the project go forward smoothly and conclude successfully.

Addressing the second issue that was raised to him during his earlier visit to Omadhoo Island, President Solih noted that Fenaka Corporation Limited (FENAKA) had already relocated the power house, upgraded the electricity network and completed the preparations to provide electricity services to the newly-established residential area of the island. He also stated that the Omadhoo Island water and sewerage project, as well as a multi-purpose hall for the local school, would be initiated the following year.

President Solih also delineated several other projects planned or already underway at neighbouring islands in Kolhumadulu Atoll. Burunee Island's water and sewerage project, as well as a project to construct six new classrooms in the island school, had been tendered and allotted to initiate later this month. Further, a Futsal Field and Youth Centre had already been established on the island.

Madifushi Island's outer breakwater of the harbour project had already been completed, and the Solar PV project and waste management centre project for the island had been tendered. The Football Field project and Volleyball Court project for the island was also ongoing, with the Football Field project tendered and allotted, ready to initiate soon.

Vilifushi Island, the residents of which requested a solution to their housing shortages, would see a project to construct 100 housing units - the agreement for the project is set to be signed tomorrow. He also revealed that land reclamation for Hirilandhoo Island and Kinbidhoo Island is projected to be initiated next year.

Continuing his statement, President Solih underscored that along with developing local infrastructure, social maladies also need to be addressed, specifically the two most prominent in the Maldives, religious extremism and drug abuse. He spoke on the government's plans to overcome these serious issues, urging the residents of Omadhoo Island to take part in combatting these issues through a combined national effort. He stated that educating younger generations on the holy tenets of Islam from an early age is the best way to combat these social maladies.

President Solih also spoke on the state of the Maldives' economy following the effects of the Covid-19 pandemic and subsequent preventative measures. He stated that the government's efforts had successfully curbed the spread of Covid-19 in the Maldives, however, the economic loss suffered was dire. As the Maldives' borders reopened, some of our neighbours are using our country as a safe transit zone, staying in guesthouses and enriching local economies, he said, but we can only continue this momentum by being cautious.

President Solih revealed that the government had today initiated an inspection programme of guesthouses and tour operations to ensure that tourists who choose to transit in the Maldives are being treated fairly and that the mandated Covid-19 control measures were being implemented strictly. It would be a tremendous setback to lose control of Covid-19 in the Maldives again, he said. President Solih called on all guesthouse owners and tour agents to strictly maintain Covid-19 control measures and take all necessary precautions to prevent community spread.

Concluding his statement, President Solih extended his gratitude to the people of Omadhoo Island for their support and the trust they placed in him. He prayed that all residents of Omadhoo Island would be blessed with happy and prosperous futures. 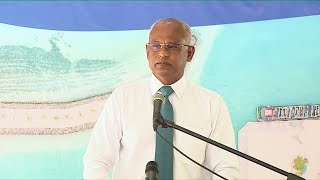 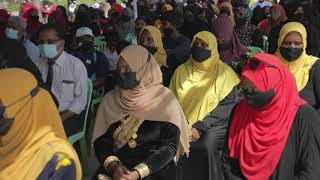