The President listened to the concerns raised by the fisher community, business owners and other stakeholders from the island. Speaking at the meeting, President Solih conveyed that the administration had a thorough development plan focussed on the atoll and that the Covid-19 pandemic has had a considerable effect on hindering the execution of these developmental projects. Highlighting the challenges faced by Small and Medium Enterprises (SMEs), the President added that the government had provided support packages to SMEs. He added that a team from the SME Development and Finance Corporation (SDFC) will soon visit the island to brief them on loan opportunities for SMEs.

The President also divulged on the administration’s policies on the development of the fisheries sector, going into details of the government's plans to address concerns raised regarding Funaddoo Island of Thaa Atoll. He added that the government will also reexamine the policy decision on weighing fish.

Speaking at the meeting, the President talked about the covid control measures enforced, adding that broader compliance is needed. He also discussed the broadening of economic activities on the island and listened to concerns raised by the community.

The President’s visit to Thimarafushi Island is his first destination in his ongoing trip to 7 islands of Thaa Atoll. The President is accompanied by cabinet ministers, senior officials from the President’s Office and a delegation of high level government officials. 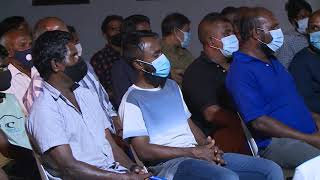