The Ambassador of the Republic of Korea to the Republic of Maldives, H.E Jeon Woonjin, presented his credentials to H.E President Ibrahim Mohamed Solih at a ceremony held this morning at the President’s Office.

Following the credentials ceremony, President Solih congratulated the new Ambassador on the commencement of his term and convey his thanks to the Republic of Korea for their support towards the Maldives’ candidature during the 76th United Nations General Assembly (UNGA) elections, in June earlier this year.

The President thanked the Korean government for the continued development assistance and expressed his appreciation for the generous contributions by the Government of Korea as relief assistance provided to the Maldives during the Covid-19 pandemic. The President and the Ambassador also discussed issues of mutual interest for both countries, such as climate change.

Ending the call, President Solih conveyed his well wishes to Ambassador Jeon Woonjin. Both the President and Ambassador committed to working together to further strengthen the bilateral relations between the Maldives and South Korea. 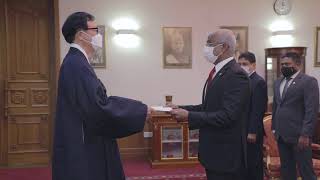