The new Ambassador-Designate of the Republic of Germany, His Excellency Mr Holger Lothar Seubert, has presented his credentials to President Ibrahim Mohamed Solih, at a ceremony held at the President’s Office this morning.

Speaking to the Ambassador following the ceremony, the President congratulated Ambassador Seubert on his ambassadorial appointment and conveyed his hope that the existing bilateral relations of Maldives and Germany would further strengthen in days to come.

The President stated that Germany was an important bilateral partner to Maldives and thanked the German government for the development cooperation rendered throughout the years.

During the call, the President and the new Ambassador discussed ways to enhance existing relations between Maldives and Germany, emphasizing cooperation on areas relating to multilateral relations, fisheries, economy, health and education sectors.

President Solih and Ambassador Seubert also discussed the current Covid-19 situation in both countries. President stated that the aim of the Maldivian government is to fully vaccinate everyone residing in the Maldives, despite the nationality.

Ambassador Seubert expressed his heartfelt gratitude for the warm welcome, and stated that it is a privilege to serve as the Ambassador of Germany to the Maldives. He further expressed that he will remain committed to ensuring that the positive trajectory of relations between Maldives and Germany will remain intact and flourish further during his tenure. 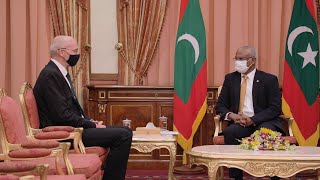