Vice President Faisal Naseem has met with the Councillors from Himmafushi Island of Male’ Atoll. Discussions at the meeting, held at the President’s Office this afternoon, were focussed on the developmental plans and concerns about the most pertinent issues and urgent needs faced by the residents of Himmafushi Island.

During the meeting, Himmafushi Councillors shared their concerns regarding difficulties caused by the delay in initiating sanitation services on the island. They also shared their current plans to develop and broaden healthcare services and to increase space in the island's school.

The Vice President noted that the relevant authorities are currently working on solving the issues arisen in providing sanitation services on the island. Regarding the issues raised by the Councillors concerning the school space and upgrading the healthcare facilities, the Vice President stated that the Administration would take necessary action after discussing with relevant ministries to address the specific questions and concerns.

He further urged the Councillors to initiate new projects to fortify social well-being as a community. 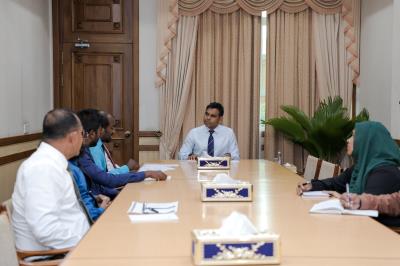