President Ibrahim Mohamed Solih has appointed Mr. Ahmed Saleem as Ambassador-at-large. The ceremoney was held this morning at the President’s Office.

Prior to this appointment, Mr Saleem fulfilled the role of Ambassador of the Maldives to the Islamic Republic of Pakistan.

Mr Saleem joined the Maldivian Ministry of Foreign Affairs in 1968. He had a long and distinguished career in the Maldivian Foreign Service (MFS) spanning for over 21 years, participating in numerous sessions of the United Nations General Assembly. In addition, he also participated in high-level meetings of the Commonwealth, Non-Aligned Movement, OIC, SAARC and many other international organizations. Mr Saleem also served as the 11th Secretary-General of the South Asian Association for Regional Cooperation (SAARC) from 2012 to 2014. 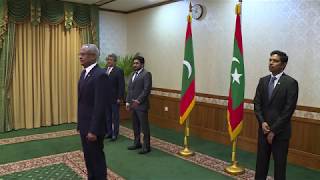