Ambassador of the Russian Federation to the Maldives Yury B. Materiy has called on President Ibrahim Mohamed Solih. The call was held this morning at the President’s Office.

During the call, the President and the Ambassador spoke of the great value accorded by both countries to bolstering the existing ties which date back decades. Discussions at the meeting were focused on fostering bilateral relations and developmental corporation, especially in the areas of tourism, education, trade and commerce.

Speaking at the meeting, the President highlighted on efforts to pave the way forward for future relations and expressed his confidence that the recently concluded Visa Waiver Agreement would strengthen existing tourism cooperation and people-to-people connections. He further thanked the Russian Government for its continued support and assistance in the international fora.

The call concluded with the President and the Ambassador expressing confidence in building the relations further over the next years. 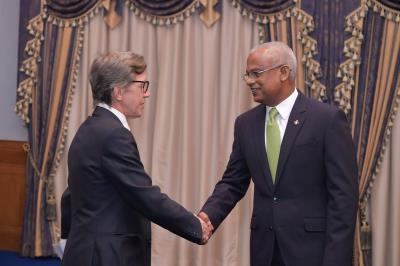