President Ibrahim Mohamed Solih has stated that there are abundant economic benefits of protecting and preserving Maldives' rich culture and heritage. President Solih made the remarks speaking at the ceremony held to commemorate the centenary anniversary of Mulee'aage.

President Solih was joined at the function, held tonight at Mulee'aage, by Vice President Faisal Naseem, former President and Speaker of Parliament Mohamed Nasheed and former President Maumoon Abdul Gayoom. In his remarks, President Solih highlighted how culture and heritage play a vital role in attracting tourists and the economic benefits that come with it.

The President further highlighted the importance the Administration accorded to protecting such sites and noted that the constitution of the Ministry of Arts, Culture and Heritage is a testament to the fact. He highlighted the ratification of the Heritage Act, which ensures the documentation, preservation and protection of cultural heritage. In this regard, he underscored the role of the current generation to protect and preserve the culture and heritage for posterity and progeny.

Speaking further, President Solih recalled the historical significance of Mulee'aage and highlighted the role it had played for the past century—as the Presidential Palace, President's Office, Prime Minister's Office, House of Parliament, Supreme Court, Foreign Ministry and Home Ministry among many others. He also spoke about the numerous forefathers who had called Mulee'aage home.

At the function, President Solih was presented with a special plaque declaring the registration of Mulee'aage as a hundred-year-old heritage site. President Solih also presented plaques to the staff who had served in Mulee'aage for over 20 years and expressed his heartfelt gratitude for their unwavering duty and service. 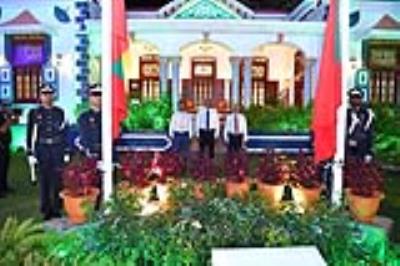