Governor of Yunnan Province calls on the Vice President

The Governor of China’s Yunnan Province Ruan Chengfa has met with Vice President Faisal Naseem this afternoon at the President’s Office.

Highlighting that this year marks 47 years of diplomatic ties between the two countries, the Vice President underscored that China has been one of the most significant development partners of the Maldives. Speaking about some of the recent development projects undertaken with assistance from China, the Vice President stressed that the Administration is keen on continuing cooperation in such projects.

The Vice President also noted on the number of tourist arrivals from China, which he stated contributed immensely to the tourism sector—one of the key economic drivers for the Maldives.

Speaking at the meeting, the Governor of Yunnan noted the close relations between the Maldives and Yunnan and highlighted some areas to improve ties further. Some of these areas include economic and trade ties, tourism, agriculture, education and sports. The Governor also stated that Yunnan was keen on extending higher education scholarship opportunities to Maldivian students and enhance people-to-people cooperation in the sports and agriculture sector.

The Governor also noted that economic and trade ties between the Maldives and Yunnan Province had grown seven-fold during the past year. The call concluded with the Vice President thanking the Governor for the continued assistance, especially in the higher education, sports and agriculture sectors. He further expressed his gratitude to the people and the Government of China and assured continued support and cooperation in the years to come. 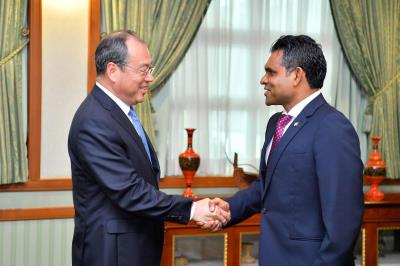