President Ibrahim Mohamed Solih has visited the victims and the site of today’s tragic fire incident at T-Jetty area. The President visited the victims, currently being treated at Indira Gandhi Memorial Hospital (IGMH), and inquired about their treatment and well-being.

The President noted that the rapid response of firefighters and emergency personnel along with the help of volunteers made it possible to contain the situation before the fire spread further and did even more damage. President Solih reiterated that the administration is working on ensuring the placement of all necessary measures to prevent fire incidents.

The fire incident was reported after a speed boat and fuel bowser caught fire, spreading to several nearby fuel bowsers before the firefighters controlled the fire.

T-Jetty area quay wall is allocated for docking sea vessels for refuelling, while a majority of the fuel bowsers used for fuel transportation are often parked nearby. 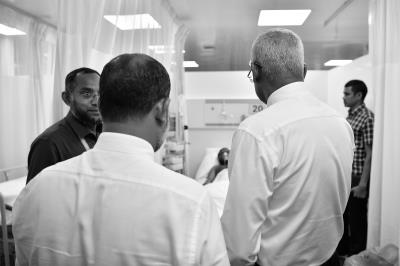